Yesterday by The Beatles

Alright, this is our first look at Yesterday by The Beatles, and this is a much-beloved fingerstyle song played by Paul McCartney. So, we’re going to begin with these opening measures from the intro that are pretty easy, we’re just gonna form that G-chord.

So, of course, that low note, third fret, and low E, we’ll use our thumb to pick and we will use our first, second, and third finger for that G, B, and high E strings.  Go ahead and hold that chord throughout, mainly that low E, hold that while you play the high strings.

Overall, if you keep those chord formations and don’t confuse yourself, G, we’ve got the chord formation where we’re doing the double third fret on the high E and B string, some people will play that B string open which is fine too, but for this particular performance we’re going to want to use our third finger on the B string, fourth finger on the high E. Then the next switch here, remember to bar that chord for that chord formation, and then the last part of that second measure. If you get confused about how to fret it’s going to slow you down and affect your performance.

We’ve got five more measures to finish up the verse to Yesterday. 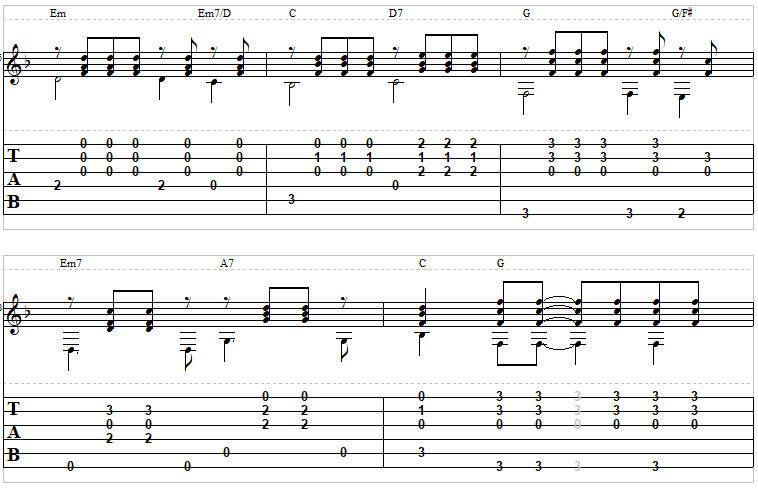 In the first measure here, all we need to do is form an E-minor chord.  We’ve got that rhythm that we began in the intro, and then right here in the second half of the measure, we’re going to do a little movement. It’s just adding that open D-string here to the E-minor chord formation. So all you have to do is lift that second finger up, no problem.

Measure 2, start on C, easy. Now on D7. So we’re just going to apply that rhythm from the intro to that C and D7 chord. Now, back to our G, in the 3rd measure, the second half of the measure, we’re going to walk down one fret on the low E that’s in the 4th measure.

In the 4th measure, we’ve got an A7 chord this time, so we’re going to add that pinkie to the B-string. We’re going to go ahead, after we hit that E string,  and switch to an A chord. And that leads us to the final measure, one beat of C, and then we’ll finish out in G.

Overall it’s not totally for beginners but it’s easy enough that most people can work with it and get something out of it and be able to play it with some practice. So that is all the verse, up next will be the chorus. That will be our next lesson.

Now, on to the chorus…