Anatomy Of A Turnaround

Most turnarounds can also be used as intros or endings.This is because the turnaround in bars 11 and 12 takes us back (turns around) to the start of the next 12 bars of music or pulls us toward the I chord for a big finish.  The intro does the same thing by kick starting the song to begin at the first cycle of 12 bars.

There are probably as many variations for the turnaround as there are blues progressions, ranging from the very simple to complicated jazz blues lines. No matter how simple or complicated a progression is, there are some basic structural guidelines that should always be applied to a turnaround.

For example, let’s take a simple progression where only the I and V chords are played in the last two bars as shown below.

A common structure for a turnaround with this type of progression is: 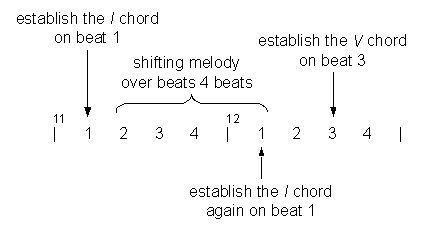 Let’s look at what all this means in a little more detail.

The I chord in this progression (as with most blues progressions) begins on beat 1 of bar 11 and 12.  We need to keep that tonality in the turnaround by playing either the I chord or a note from the I chord (ie. root, 3rd, 5th, 7th, 9th etc) on each beat 1. We can play other scale notes in a riff or sequence leading up to or past this beat, just as long as the chord tonality is established on the beat.

The V chord begins on beat 3 of bar 12. As with the I chord, we need to establish the tonality of the V chord by playing the chord or a note from the chord. We can also play a riff or sequence before and/or after the beat.

This is the part where the fun begins.  We can use our creativity to come up with some really cool sounding phrases to play between beat 2 of bar 11 and beat 1 of bar 12. I’ll show you some typical phrases and give you some simple rules for constructing your own phrases.

If the I chord is played throughout bar 11, you can use phrases that consist of two notes from the I chord that either descend, ascend or move in contrary motion to resolve to one or more notes of the I chord on beat 1 of bar 12. You can also keep one note stationary (usually the root note) and move the other note to expand or contract the interval between the two notes.  In 12/8 time this movement will be in triplets, in 4/4 time it will be in two 8th notes per beat.

To give you an idea of what I mean, the  turnaround below is a descending phrase in 12/8 time.

We now understand what makes a blues turnaround click. Our next step is learning a few techniques we can use to spice them up – techniques such as double stops and slides.