What the Ell? How to Write Your First Song 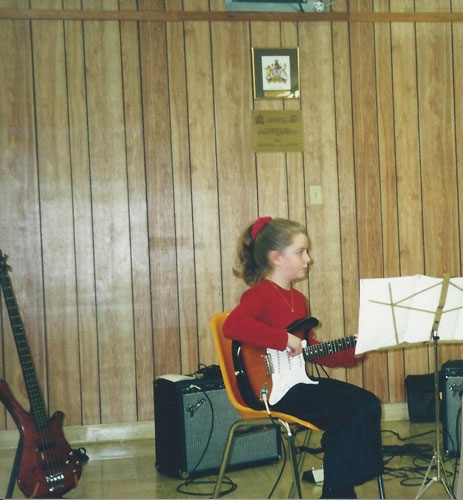 A young Lindsay Ell in performance armed with a Fender rig and ready to take the first step.


My first song was terrible. I wrote it when I was 10 years old and it was called “That Place in My Heart.” I know, super sappy. It was about my parents, but to my credit what else is a 10-year-old going to write about? The lyrics were pretty bad as well. I don’t think I’ve ever released this in any form. I can vaguely remember the chorus….

But, I digress. Everyone needs to start somewhere. Picasso needed to paint that first painting. (Although his first painting was probably pretty amazing.) A first step is a first step. So whatever you do, don’t be afraid to create. As Wayne Gretzky said, “You miss 100 percent of the shots you don’t take.”

Maybe you’ve never written a song before, or you’ve written a few songs and are looking to improve, or perhaps you’ve been writing for years. Just remember: There are no rules to songwriting. The minute someone tells you the “right way to do it,” a new writer will come out of the gate and prove you wrong.

However, from my first song till now—which is probably some 2,500 songs later—I’ve definitely learned better habits. Or a few things to at least point you in a good direction. As with any kind of writing, once you find an approach or technique that works for you, stick to it. Songwriting is a lot about going with your gut.

Chops: Beginner
Theory: Intermediate
Lesson Overview:
• Develop a personal strategy to encourage the creative flow.
• Learn how to systematically work through a song.
• Create assignments for yourself to bolster your creativity.

Write Freely
Songwriting is about connecting to yourself. Be as honest as you can and try to let your thoughts flow through you. Anytime I get writers block, or I can’t figure out how I want to say what I’m trying to say, I set a timer for five minutes and I just write. Exactly what I’m feeling. All my thoughts. Unedited. Some schools call this “creative writing.” Once the time is up, read what you’ve written and underline things that you like. You’ll be surprised what kind of song ideas come from writing what’s on your mind. You can always edit a song after it’s finished. Get a melody and words down on a page before you start to overthink yourself. I think a song is never finished until it’s recorded in concrete form.

Also, lean into your feelings. It’s at the best and the worst of times in life that I get my most original ideas. I try to just pick up my guitar, hit the record button on my phone, and see what comes out … even if it’s just for two minutes. Ideas will come out of nowhere. What you say off the top of your head will surprise you.

Jump!
Don’t go after what you think everybody else is going to like. Writing songs should never be about getting through the process or being distracted by what everyone else is doing. I remember a time right after I moved to Nashville and I was a few years into my publishing deal. I felt like I was just writing for a job. I wasn’t writing anything I liked, but rather just trying to guess what radio wanted. The songs felt forced. Then one day, after releasing a few singles that hadn’t worked at radio, I decided I was just going to write music that made me happy. If no one wanted to listen to it, then fine. But at least I was going to write something that inspired me—this is where artistry comes from. It was like I had finally decided to jump off the diving board.

Every. Day.
Writing even one line every day is better than writing nothing. You’re not going to get better at something if you don’t do it over and over again. My goal is to write a little bit each day—even if it’s just a title or one guitar lick. I have hundreds of 15-second recordings in my phone. By constantly creating, you’ll be able to sift through the mediocre pieces (and believe me, there will be some of those) to find some really good building blocks that you can form into a song. And I never get stressed out about finishing a song. If it’s not happening that day, I leave it and start something new. Instead of forcing yourself to finish something that’s not ready to be finished, it’s much better to return to a half-fleshed-out idea with a new perspective.