“Under The Bridge” by Red Hot Chili Peppers 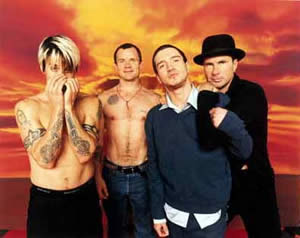 Where to find this song – BloodSugarSexMagik track #11

Few rock groups of the ’80s broke down as many musical barriers and
were as original as the Red Hot Chili Peppers. Creating a new musical
style by combining funk and punk rock together, the Chili Peppers spawned
a flurry of imitators in their wake, but still managed to be the leaders
of the pack by the dawn of the 21st century. Let’s not forget their
on-stage antics, such as wearing socks on stage……not on their feet.

Here’s what it sounds like at the normal tempo of 69 bpm:

Now, let’s break it down into 2 parts. Isolate and practice each part
separately. Below is the easier of the two. With the capo on the 2nd
fret you may notice the familar C and E chord shapes.

Here is the 1st part looped at slower tempo for you to practice:

Here is the above 2 measure looped at a slower tempo:

The third measure and fourth measures are a little more daunting. Begin
the third measure by noticing that you will have a hammer-on, a slide,
and a pull-off in here. A hammer-on is when you go from a lower note
to a higher note, only striking the first note(s). A pull-off is the
exact opposite. A slide is when you move your fingers while touching
the string(s) lightly to muffle the guitar a little. Slides are usually
indefinite to where you are sliding, unless the tablature says otherwise,
so you can slide whichever direction you really want to, as long as
you aren’t sliding away from the next note you will want to play. Place
your 3rd finger on the fourth fret on the “A” string, and
slide to the fifth fret on the same string. Next, use your 2nd finger
to play the “D” string on the fourth fret, and leave your
3rd finger where it was from the slide. That will be the next note on
the fifth fret. Play the open “G” string, and then play the
fourth fret where your 2nd finger was. Next, use your 1st finger to
play the third fret on the “high E” string. Hammer-on with
your 3rd finger on the fifth fret, and then play the third fret again
with the same finger you used a second ago. Next, play the “G”
string open once, and then proceed to the slide. To slide, place your
3rd finger on the fifth fret on the “A” string, and your 2nd
finger on the fourth fret on the “D” string. Slide to the
sixth fret with your 3rd and the seventh fret with your 2nd finger to
end the measure.

The fourth measure is identical to the second measure. Enjoy!

Complete Transcription
To “Under The Bridge” (PDF)

Complete Transcription
To “Under The Bridge” (Power Tab)