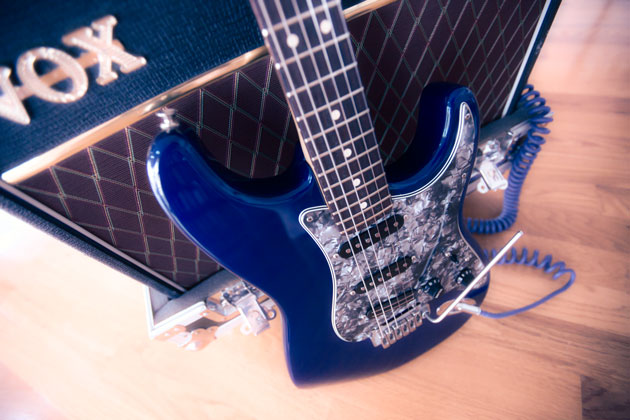 
Being a rock guitar teacher at Berklee, which is known primarily for jazz, is a bit like being the best dogsled racer in Hawaii. At the same time, it has its advantages. Mostly, I get a unique perspective on things simply because of where I am. There’s been a long-standing debate among musicians about the advantages and disadvantages of being musically educated. Some feel it’s essential, while others say it kills creativity. For me, it’s not what you know, but what you do with what you know.

Writing about rock improvisation is difficult. It’s not any one thing that makes it happen, but rather several elements converging. A great rock solo tells a story that gives you chills when you listen intently. It makes you feel. It’s visceral. My point is that learning scales and music theory will certainly broaden your horizons, but it might not help your rock improv.

When I think about what to practice, I think about balancing the head (the ability to intellectually understand what I’m doing), hands (the ability to physically execute the musical phrase I’m envisioning), and heart (creative expression). If I’m honest with myself, I usually find that one of those elements is a little out of balance with the others. That helps me decide what to practice next. If those elements are in balance, I’m playing at my current maximum potential, but I’ll know that there will always be room for improvement.

Most rock tunes tend to be harmonically simpler than most jazz tunes. For this reason, knowing a lot of different scales won’t necessarily make you a better rock improviser. So then the question is, what do you practice to become a better improviser? When your goal is to generate a fresh idea, very often this creates a kind of mental pressure that achieves the exact opposite of creative flow. One solution to this dilemma is to look for new ways to manipulate what you already know. It relieves the pressure of trying to be original and lets you experiment without worrying too much about results. If you like it, keep it. If not, throw it out. Simple as that.

Often, I find myself playing a game of “What if?” In other words, I’ll create a rule for myself, just to see what happens. Even though at first it seems like I’m artificially limiting myself, this approach actually brings an odd sense of freedom. Once you limit your options, the mind tends to think of a lot of possibilities within the set of rules. Many times I find things I might not have thought of, or paid any attention to.

If you try this approach, these things are guaranteed:

Don’t Step in the Hole
Our first restriction is entirely rhythmic and the idea is simple: Don’t play on beat 1. You’ll find that you have to listen to your playing closely to understand where beat 1 actually is. In the beginning, it may sound stiff, but given a little time, you’ll be surprised at how many variations you can come up with. Check out Ex. 1 to see how I might use an easy A minor pentatonic (A–C–D–E–G) shape to practice this.

In Ex. 2, we revisit this concept while using G Mixolydian (G–A–B-C–D–E–F) to play over a G7 chord. To make the line sound fluid, pay attention to the position shifts.

Roots Are for Kids
It might be hard to fully embrace this idea, but the root isn’t the most important note in a chord. Let’s try leaving it out and see what happens. In Ex. 3, we have a short line based around A Mixolydian (A–B–C#–D–E–F#–G) that skirts around the root, but never actually includes it. Notice how each phrase or motif starts on a chord tone other than the root.

Now, let’s move this no-root concept to the key of D. In Ex. 4, we avoid the root, but we also outline some diatonic chords. For example, we start off with a F#m7 arpeggio (F#–A–C#–E) that leads right into a C#m7 arpeggio (C#–E–G#–B). Note: G# is an “outside” note—i.e., one not found in the key of D—that adds flair. Remember, there aren’t any “wrong” notes, it’s all about how you use them and resolve the tension they create.

Slippery Strings
Here’s another “practice rule” to explore: Try playing an entire solo without using the 2nd string. Why would you do this? Well, sometimes in the heat of a song, a string gives up the ghost but you still need to melt faces. If you develop the ability to be musical while dodging a string, you’ll be ready for this inevitable event. In Ex. 5, we’ll riff in G major without touching the 2nd string. We start with some diatonic sixths and then go into an E minor-inspired idea before ending with a descending scalar phrase.

And of course, we can reverse that idea. In Ex. 6, the entire phrase involves only the 2nd string. This is played over a D7 sound, so we’ll stick to D Mixolydian (D–E–F#–G–A–B–C). Naturally, there’s a wealth of possibilities here. For example, try playing a melodic minor scale along the 4th string while experimenting with different combinations of glissando, hammer-on, and pull-off moves. Or what about some Dorian sounds on the 1st string? Bonus: Try playing such single-string exercises with a slide to work on your intonation.