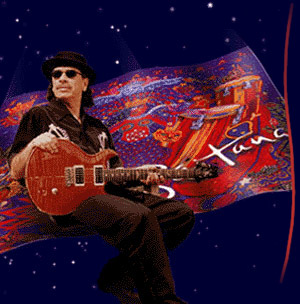 Where to find this song – Supernatural track # 5

Carlos Santana was born on July 20th, 1947, in Autlan, Mexico. At a
very young age, he was introduced to the world of music by his father,
Jose. Jose taught the young Santana first how to play the violin. Carlos’
father just so happened to be a seasoned veteran of the mariachi violin.
In turn, Jose began teaching Santana the concepts and fundamentals of
musical theory. The knowledge that he attained from his father quickly
enabled Santana to branch out into different genres of musical liberation.
His love of the guitar became the foremost focus on his mind, and when
the Santana family moved to Tijuana, Mexico, while young Santana was
only eight years old, he started learning the eccentricities of the
modern guitar by such musical afficiandos as B.B. King, T-Bone Walker,
and the great John Lee Hooker.

In this popular riff, we will focus on the intro to this song. You
will begin with your 2nd finger on the twelfth fret on the “D”
string. You will then be using your 3rd finger to play the fourteenth
fret on the same string, sliding from the twelfth. The notes will then
repeat into the second measure, where you will be performing some vibrato
on the fourteenth fret on the “G” string.

The next measure will begin by placing your 2nd finger on the thirteenth
fret on the “G” string. You will be performing a 1/2 bend
here, so listen closely to the audio and try to duplicate that sound.
For you more experienced players out there you can hear what the note
should sound like by going one fret toward the pickups on your guitar
and that is the desired note that should be bent to produce the correct
sound.

In the fifth measure you will be performing a few full bends, which
is two frets from the origin to achieve the correct sound. You can also
tell by listening to the audio how far to bend it. Use your 3rd finger
to bend the note on the seventh fret, and then use your 4th finger to
play the eighth fret on the “B” string. You will then go from
the seventh fret on the “G” string, pulling off onto the fifth
fret on the same string with your 1st finger.

The next measure will transition from the measure before. Here you
will use your 1st finger, repeating the fifth fret note on the “G”
string. Then, use your 3rd finger to play the seventh fret, pulling-off
of the note, and then moving your 1st finger to the fourth fret on the
same string.