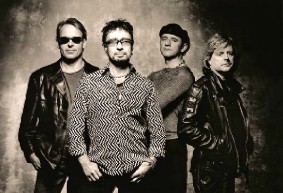 Bad Company is one of a handful of bands that literally define Rock n Roll. For 21 years, Bad Company has epitomized a style that values song form and the band concept over the particular of individual solo careers. In the process, Bad Company built itself into one of rock’s most durable and popular touring acts, providing the standard by which such groups as Lynyrd Skynyrd, Bon Jovi, and the Black Crowes have publicly measured themselves.

This song is a bit confusing to play, but follow closely the instructions and the video and you should be fine. In this lesson, there are a few hammer-ons. That is about it. A hammer-on is when you go from a lower note to a higher note, only striking the first note.

Begin the first measure by barring your 1st finger over the fourteenth frets on the “D” string, the “G” string, and the “B” string. Then, just hammer on to the fifteenth fret on the “B” string with your 2nd finger. Next, just let off of the fifteenth fret a second
and play the barred fourteenth frets a few times. Then, barre the same strings, this time on the ninth frets, and use your 3rd finger to hammer on to the eleventh fret on the “D” string, Remove your 3rd finger ( figuratively, not literally!!!!) and then just play the barred notes to end the measure.