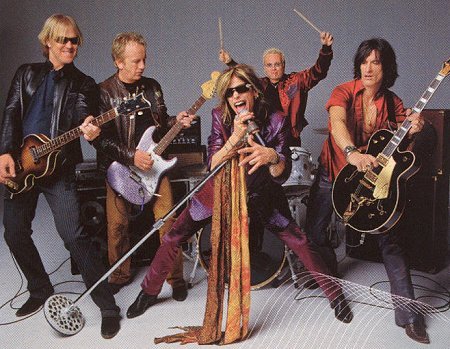 Over the years, Aerosmith has voiced discontent with their 1973self-titled debut. The songwriting may not have been as fluent as their newer releases, and Steven Tyler’s singing style wasn’t fully developed yet, but the album succeeded in the band’s raw, rock-meets-blues performances. Now, they have nothing to worry about. They are still everywhere you turn!

The main riff has two guitar parts. This is what they sound like together:

Play the second measure by keeping your fingers where they were from the end of the first measure. Play that a couple of times, and then just like you did at the beginning of the first measure, pull your 3rd and 4th fingers off and play the second fret on the three strings shown once. Put your 3rd and 4th fingers back, and after playing that once, let off with all of your fingers and then place your 1st finger back on the second fret on the “D” string. Don’t forget the open notes.

The second guitar part, though a little trickier, isn’t much different than the first. Let’s focus on the third measure, as the rest are almost identical to the first guitar part.

The third measure has a couple of pull-offs in it. A pull-off is when you go from a higher note to a lower note, only striking the first note(s). The honest truth about this riff is that you may be performing a pull-off without even knowing it. Notice that the frets that you will need to play are almost the same as the last measure on both of these parts. Get familiar with the last measure on guitar part 1 before doing this, and you will have no problem. Notice the only difference is at the end of the third measure when you are to play the second fret on the “A” string instead of on the same string. The rest is relative to the last measure from guitar part 1.