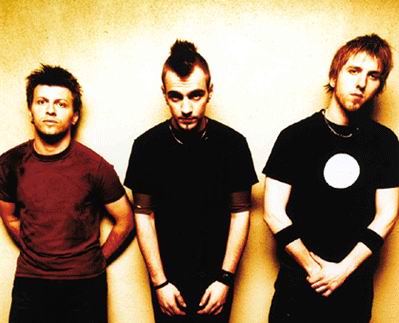 Where to find this song – Three Days Grace track #2

The members of Three Days Grace began hammering through punk chords
when they were in their teens, carving a derivative yet spastic sound
that fueled their live performances. Three Days Grace was formed in
Norwood, Ontario, Canada, in 1997. The group was originally called
Groundswell, a five-piece band that lasted from 1992 until transforming
to a trio five years later.The band completed its self-titled full-length
in Woodstock, NY, at an isolated location free from big-city distractions.

This one is in drop D tuning.

Here’s what the main riff sounds like with guitar and bass:

As this riff will be in drop d tuning, notice that all the notes being
played will be easy to play using just one finger. The first three
measures are identical. You can use any fingers that you want to use
to play the notes, but remember that since you are starting out on
the ninth fret, so try starting with your 3rd or 4th finger and moving
up to your 1st finger in the finale.

For the last measure, you will need to barre your 1st finger on the
fifth frets on the “low E” string, which has been tuned to
drop d, and the “A” string as well. Use your 4th finger to
play the seventh fret on the “D” string. Next you will be
playing mutes. Do this by placing your fingers over the strings that
are shown, but you won’t ever actually press down on the strings to
sound a note. Then all you will do is keep the same formation from
the last chord you played and move it down two frets to the seventh
and ninth frets.