(I Can’t Get No) Satisfaction by The Rolling Stones 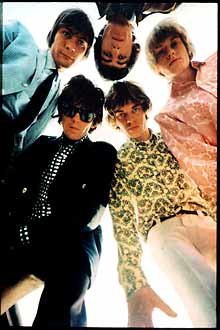 Where to find this song – Out of Our Heads track # 7

The Rolling Stones had pioneered the gritty, hard-driving blues-based
rock & roll that came to define hard rock. With his macho attitude
and extreme maliciousness, Mick Jagger became the stereotypical ( no
pun intended) rock frontman, tempering his macho showmanship with a
detached, lucid reality, Keith ( Keef) Richards surged forth as one
of rock music’s ” man you wanted to be” due to his rebelliously
intense guitar styling.

This is probablly the most recognized rock riff ever. It’s easy to
learn how to play, so pick up your axe and start playing along!

Here’s what it sounds like at the normal tempo of 137 bpm:

The second measure has two pull-offs in it. A pull-off is when you
go from a higher note to a lower note, only striking the first note(s).
Use your 4th finger to play the fifth fret twice, and then pull-off
to the fourth fret with your 3rd finger. From your 3rd finger, pull-off
from there to the second fret with your 1st finger. That is it!!!!!

Complete Transcription
To “(I Can’t Get No) Satisfaction” (PDF)

Complete Transcription
To “(I Can’t Get No) Satisfaction” (Power Tab)