“Bulls On Parade” by Rage Against The Machine 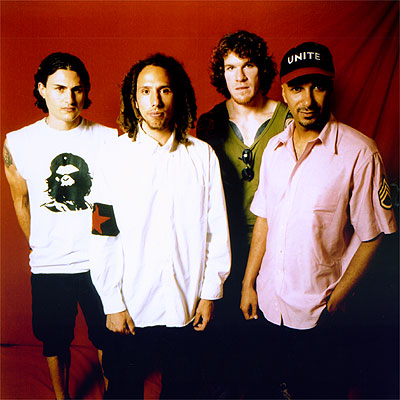 Where to find this song – Evil Empire track # 2

Rage Against the Machine earned their wings from anarchist fans for
their over-the-top antics and fiercely political music, which brewed
leftist rants against corporate America, cultural imperialism, and government
oppression. The strange thing is that the band’s guitarist, Tom Morello,
actually has a law degree from Harvard and worked in a political office
under a need-not-be-named senator in Washington. Since the band’s breakup,
Morello has began playing as the guitarist in Audioslave, with frontman
Chris Cornell. ( Originally from the band Soundgarden)

The picking in this song is very easy, and the entire measures are
all the same. All you need to do is place your 1st finger on the second
fret on the “low E” string. Then, just place your 4th finger
on the fourth fret on the “D” string. All you have to do now
is pick accordingly.

The rest of the intro is equally easy. The key here is the mutes. Make
sure you can get those down in time, and the riff will be no problem
at all. All you have to do is place your 1st finger on the “low
E” string and your 3rd or 4th finger on the fourth fret on the
“A” string. There you have it!

For the second measure, just leave your 2nd finger where it is. Play
that once, and then play the open notes twice. End this measure by using
your 1st finger to play the first fret on the “low E” string.