Zen And The Art Of Chord Changing

This article is aimed mainly at first-timers and, to a lesser extent, intermediate players. It aims to get you thinking outside the box, thinking ahead in the music, becoming more fluent, more inventive. More advanced players will almost certainly have figured this lot out already, most without realising it and most without remembering now that it was a problem when they first started. As you read this, you may well start thinking “This is getting a bit deep… I’m only a beginner, for Heaven’s sake…” Stay with me, OK?  Play the chords and the changes on your guitar as you read, so that what I’m saying makes sense. After only a couple of weeks you’ll be doing automatically what it takes most giutarists months to figure out for themselves.

There was a post on GA a few months ago entitled “The True G”. The poster explained that one of his books showed a particular way of forming an open G chord, one website had another fingering and GA yet another. “Which one is correct?” he asked, explaining that he didn’t want to get into a bad habit that would be hard to break later on. The answer, of course, was that they were all correct. There are many more threads on the forum asking similar questions. Since I only picked up a guitar a couple of years ago, I can clearly remember asking myself the same question.

I then started trying to analyse how to make things go faster and more easily. At the time, I was trying to work out some songs by David Gray. On the face of it, they are quite often simple tunes and simple chords. But, when you really listen hard, some of the changes are quite complex and there was just no way I could make the changes slickly enough when using the “standard” fingerings that I learned from “Guitar For Dummies” (very good beginner’s book, by the way). I started experimenting with other fingerings and found some that worked but there were other songs where the new fingering made life more difficult than before. Hmmm.

I guess this will naturally break down into 3 sections:

1. Being nasty to your pinky finger

3. Sail Away by David Gray (If you don’t have the “White Ladder” album, go buy it/steal it/borrow it)

Being Nasty To Your Pinky Finger

A great many beginner books will show the open G chord played with the first 3 fingers: 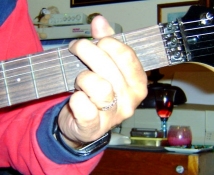 The reason is probably that the writers recognise that most people’s pinky fingers are extremely weak at first. It takes time to build up the strength required to hit a string cleanly and hold it straight. It is therefore easier to get people to hit and hold a G chord using the 3 strongest fingers.

Most beginners do one of 2 things when they try to play this chord with their 2nd, 3rd and 4th fingers:

Either their finger collapses backwards, as shown at left, thus the 3rd finger flattens out as well, blurring the 5th string.

Or, it collapses forwards onto the nail, so the 1st string becomes blurred.

It takes a little time to get the strength to hold your pinky just so. You must develop that strength, though, as it makes the next steps sooooo much easier.

So, be nasty to your pinky,  the rest of your fingers will thank you in the long run.

To be fair to “Guitar For Dummies”, the book showed both fingerings and advised this one, even though it is harder to hit at first. 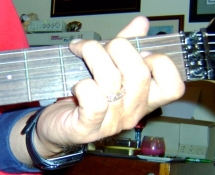 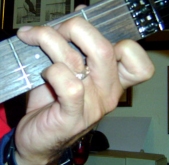 So, be nasty to your pinky. Don’t subject it to physical punishment if it won’t behave. You can use cuss words, though – it’s heard them all before…

Compare the picture at left (open G) with the one on the right (open C). The thumb has not moved at all, the 1st finger has gone down where it was loitering with intent anyway, and the 4th has just lifted off a fraction. The 2nd and 3rd have just moved across by one string. This can be summarised as:

That’s the “Speed” bit of this section proven beyond doubt, I think you’ll agree. And so to anchors.

Again, most beginner books will advise you to take your fingers off the fretboard and place them into a new chord-shape. The reason they do this is that you need to develop muscle memory as to the various shapes. Remember in “Friends” the episodes where Phoebe was trying to teach Joey how to play guitar, but wouldn’t let him even touch a guitar until he had learnt the hand-shapes? And how angry she was when he admitted he’d gone into a guitar shop and tried some of them out? There’s nothing wrong with this initial approach (well, there was with Phoeb’s, obviously unless you only want to play Air Guitar). You do have to know the various shapes. The problem comes when they tell you to move from one shape to the next. Because they’ve told you to take your fingers right off, then on again, most people try to do that during this next learning stage. But I ask you a question. What’s the point? Let’s consider a common chord change, that of A min to C maj:

OK, what’s the difference? Only one finger has had to move, the 3rd. Everything else has stayed in the same place. So why take all 3 fingers off, only to put 2 of them back down exactly where they were before? It’s like a broken pencil: pointless.

This neatly serves to illustrate my next point: that of anchors. Look for fingers that are common to both chords, then keep them still… Only move the ones that need to move. (You’ll already have realised that anchors are integral to minimum movement and vice-versa)

OK, so what happens when you go between 2 chords that have no common fingers?Â  Consider G maj to D maj:

This sequence shows the transition slowed down massively to demonstrate the moves. The 4th finger provides an absolutely rock-steady anchor about which the other 3 fingers can pivot. The 2nd and 3rd fingers move across, maintaining their shape. Once clear, the 1st finger can move into position. The D shape goes down and it is only in the last split second that the 4th finger comes off.

Spookily enough, it also works going the opposite way. Put your pinky down, take your 1st finger off, move your 2nd and 3rd fingers across the fretboard, keeping the same shape, put them down. Once again, your 4th finger was the anchor about which everything else moved, quickly and accurately.

How about C maj to F maj?

Here, the 3rd finger is the anchor. Everything else pivots smoothly and accurately around it.

Now try F maj to D min. You should find that your 2nd finger is the anchor.

Of course, there are some changes that don’t have a convenient anchor. In that case, slooooow down and think for a couple of seconds. Figure out which finger(s) has least distance to go. Move that one and then the others can move around your new anchor. Moves like A min to E min are a doddle, for example. E min to C maj slightly less so. Move your 2nd finger. That’s your anchor. D min to C maj? 1st finger has to move across 1 string, then anchor it so you can move the other 2.

As suggested in the title, we’re getting into a bit of “Zen And The Art of Playing The Guitar”. How many times, though, as a beginner, have you thought (as SlowBlues so aptly put it once) “Come on fingers, you can do it” If you pause for a few seconds and figure out exactly what it is that you want your fingers to do, then the whole process becomes easier. Not instantly, but you will definitely get quicker.

If you play the E min as standard with 2nd and 3rd fingers, you will naturally play the 7th with your 4th finger. In the next chord, what are you going to use to play the bass G? I suppose if you’re an Aye-Aye, you’d have no difficulty, having an extremely long index finger. However, Aye-Ayes are more generally to be found digging around in rotten tree trunks looking for termites, not surfing the web or playing guitar, so no help there, I’m afraid.

How about this second approach?

Your 3rd finger can easily reach through the gap between your 2nd and 4th fingers to make the low G. In addition, you’ll have noticed that, in the initial transition from A min to E min, your 2nd finger is your anchor.

Sail Away by David Gray

If you want to play along with the song from the CD/mp3, you’ll need a capo on fret 3, assuming you are using standard tuning. If you don’t have a capo, then edit the PowerTAB file as follows:

Click on the “Guitar” menu, then select “Setup…”. About halfway down the new window, you’ll see “Capo” with a figure 3 next to it. Select this number to 0 and click on “OK”. Now press the Play button and you should find that everything has been transposed down by a tone and a half. You will now be able to play along to the MIDI sounds generated by PowerTAB.

I have deliberately kept the rhythm fairly consistent to make it easy to learn. David Gray constantly makes very small alterations from bar to bar, but the general feel of it is there. Once you have the chords sorted, listen to the track again and see what he’s up to. It’s very interesting what he does to keep the piece rolling along.

I hope you enjoy learning to play Sail Away, and I hope that my musings help you in your quest for slicker chord changes. It really does work and it is something that you would inevitably figure out for yourself in time. However, you should find that, once you get these techniques down pat, your progress will ramp up dramatically (until you hit your next stumbling block!). When you’re learning a new song, examine the chord changes, decide how you’re going to finger them, practise it sloooooooowly, so you get clean changes, then speed things up by degrees until you’ve got it licked.