Electric Guitar Hasn’t Been The Same Since…

It’s a rare occurrence when a single song changes everything, but I’m going to list five songs that forever changed how electric guitar was played.

While Jazz musicians had been using electric guitars since the 1930’s, the later half of the 20th century saw the emergence of the electric guitar in mainstream music. This new spin on an old instrument provided the guitarist with more versatility over his instrument.  The guitarist also had the ability to alter and change the sound by using effects which enabled new experimentation.

Through the years a plethora of great electric guitar music has hit the airwaves, but the gems of songs found on this list stand out as turning points in the direction of the instrument. These songs did not create quickly fading fads, but changed how people played the electric guitar for all time.Read More »Five Songs That Forever Changed Electric Guitar

“Testify” by Rage Against The Machine 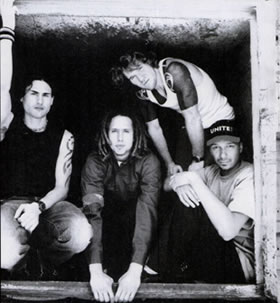 Their song “Testify” is in drop D tuning. In drop D tuning the low E string is tuned down one whole step to D. This enables the guitarist to play power chords with a single finger. Read More »“Testify” by Rage Against The Machine

In his brief four-year reign, Jimi Hendrix expanded the electric guitar more than anyone before or since. Hendrix was a master at merging all manner of music into one precise art form, often with experiments that produced high-quality feedback and roaring distortion. His frequent hurricane blasts of noise and dazzling showmanship proved that he could and would play behind his back and with his teeth and set his guitar on fire, and everyone would HAVE to love it. He possessed such considerable gifts as a songwriter, singer, and master of blues, R&B, and rock styles.Read More »Purple Haze by Jimi Hendrix

The riffs on this page are the tried and true “standards” for Rock guitar music. Walk into any music shop and you’ll find a line of people trying out the guitars for sale and I’ll bet they will be playing one of these top 10 riffs.Read More »Top 10 Rock Guitar Riffs Of All Time