We’ll build speed step by step. In this session we have speed building exercises at 60 beats per minute.Read More »Speed Building Workout 2

Changing electric guitar strings is not that hard and something you should become comfortable doing on your own. You should change your strings on a regular basis. For example, if you start to see an oily, dirty build up on your strings then you should probably change your strings. The dirt from your hands and fingers is collected by the strings and will kill your tone.

Active players or professional players may change their strings one a week or more, especially if they are playing in public. Some players change strings just before each show.

A Word About String Gauges

Strings come in variety of gauges. The gauge of the string tells you the thickness of the strings. The lower the gauge the thinner the strings, higher gauges mean thicker strings. Most manufactures display the gauge size by the size (diameter) of the high E string (the smallest string). Typical gauges run from .008 to .012.

This song is about people who claim to not be crazy even though they’re suffering from various occurrences that could lead them to be labeled as such.

Rob Thomas said that he wrote the song as a metaphor for humanity in general, a song for people who are “messed up and feel alone like that. We all feel a little messed up sometimes… you’re not alone.”

Do you want to know what really good guitar is?  This page lists 8 of the greatest guitar leads of all time. They are a… Read More »8 Classic Guitar Licks 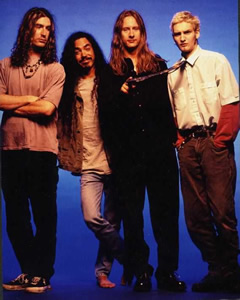 This riff is great for beginners to learn, yet may still provide a bit of a challenge for more intermediate players, too. The basic premise for the riffs is 4 chords played arpeggio style, or in other words: one note at a time. You’ll want to let each note ring as long as you can.Read More »“Don’t Follow” by Alice In Chains

Where to find this song – Heaven Tonight track #1

Cheap Trick was formed in 1975 by Robin Zander, Rick Nielson, Tom Petersson, and Bun E. Carlos. The band toured extensively before releasing their first album in 1977. The album failed to chart in the US but did well in Japan. It was in Japan that the group recorded their 1979 “Live at Budokon.” The album reached number 4 on the US charts and sold more than three million copies. Their next album, ” Dream Police, was also a hit and spawned two top 10 singles.

You should fingerpick this one. Notice the constant bass quarter notes one the low E and A strings. You should pick these with your thumb. Includes video, audio and full guitar tab.Read More »“Hey Hey” by Eric Clapton