This song teams up two of the greatest singers in modern music history. 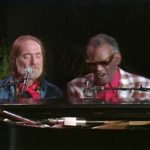 He looked down into her brown eyes, and said say a prayer for me
She threw her arms around him, whispered God will keep us free
They could hear the riders comin’, He said this is my last fight
If they take me back to Texas, they won’t take me back alive

CHORUS:
There were seven Spanish angels, at the altar of the sun
They were prayin’ for the lovers, in the valley of the gun
When the battle stopped and the smoke cleared
there was thunder from the throne,
And seven spanish angels, took another angel home.

She reached down and picked the gun up that lay smokin in his hand
She said, Father please forgive me I can’t make it without my man
And she knew the gun was empty And she knew she couldn’t win,
But her final prayer was answered when the rifles fired again