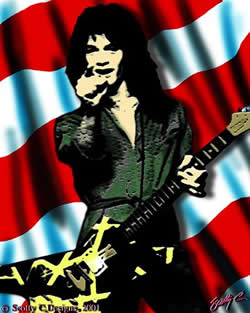 Let’s take a sneak peak into the trick bag of the one and only Eddie Van Halen. One of the most innovative rock guitarist to come along. The guitar parts in Van Halen’s take on the Roy Orbison song “Oh, Pretty Woman” gets a Eddie Van Halen face lift.

The intro to the song is a really fun riff to play. It comes complete with whammy bar tricks, harmonics, and slides. Some of these “tricks” are actually very easy to play and master, so what are you waiting for? Jump right in!

The first four measures of the intro is relatively easy:

The slide up to the 10th fret at the very end can be performed by sliding your first finger up the fretboard until you hit the 10th fret and then sliding it back down. Where you start the slide and end it doesn’t really matter. You should do it fairly quickly because you only have a beat to perform it before going on to the next part.

This is what it sounds like when done properly:

The next part of the intro introduces some of Eddie’s signature tricks which include harmonics and whammy bar tricks.

The 1st and 2nd measure are identical. Apply a slight palm mute. To do this you’ll rest the heel of your picking hand lightly on the strings just before the bridge and apply a little pressure as you pick the string. This will create a slightly muffled tone for the note.

The “A.H.” above the D note on the A string/5th fret stands for artificial harmonic. This is sometimes also called a “pinch harmonic”. A harmonic is a cool trick you can use to make the sound of the note you’re playing sound at a higher pitch.

An artificial harmonic occurs when a harmonic is induced from a fretted string. For example, if you fretted the E string at the 3rd fret and played a harmonic at the 15th fret, you would hear a harmonic G.

The “N.H.” in the measure below stands for natural harmonic. Natural harmonics occur with open strings. By slightly touching the string you are playing right above the 5th, 7th, or 12th fret when you pick an open string, you can get clear bell like tones. Give it a try! It’s pretty easy. If you don’t get a clear sounding note and get a muffled sound, then you’re touching too hard. You just barely have to come in contact with the surface of the string.

For this measure, Eddie creates natural harmonics on the 7th fret and then dips it with his whammy bar three times. That’s what the notation with the 1 over it means. It’s almost like a graphical illustration of the movement you use with your whammy bar. A dip only requires you to push the bar down and then let it return to it’s natural state. The “1” is telling you to dip down on whole step which is the equivalent of 2 frets.

In the last measure Eddie does a dive with his whammy bar. To do this just push the bar down 1 1/2 steps.