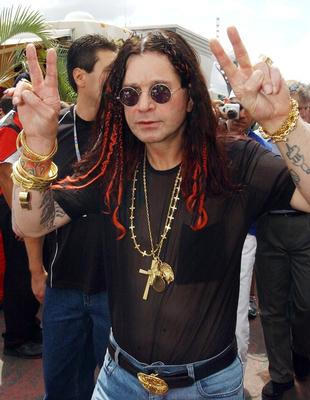 Where to find this song – Blizzard of Ozz track #6

Ozzy Osbourne. Singer. Comedian. Bat-eater. Enough said. He makes everyone
laugh, mainly because you really aren’t sure most of the time what he is talking
about. Well, Ozzy has always been like that, but years and years later it seems
to take its toll. From being the frontman in Black Sabbath, ( with Tony Iomi
himself ) to being a solo man, to starting up his own league of “Ozzfest,” to
finally being on a hit MTV show, he has run the gauntlet of stardom, even if
he might not realize it. He definitely is “the ozzman.”

This song is about the satanist, Allister Crowley. Crowley was known for his
dabbling in the occult and his practice of black magic. (Seems appropriate
for the song!)

GLOSSARY : Long glissando – this is performed by playing the note and slide
in the specified direction for the full value of the note.

To begin, you will start with a power chord formation in Dm ( D minor). You
play this by placing your 1st finger on the “A” string, your 3rd
finger on the “D” string, and your 4th finger on the “G” string.
Play this once in a strumming pattern. Lightly accent that chord once again,
and then let off the strings. While you are letting off of all the strings,
play the “A” string open once, and then put any finger that you feel
most comfortable with on the first fret of the “low E” string.

For the next measure, you will play the same power chord again that you learned
in the beginning, and perform a “long glissando.” (see above) The
glissando is from the power chord that you just played, so just keep your hand
where it was in the beginning of this measure.

The third measure is in the key of Bb ( B-flat ). You will play this by placing
your 1st finger on the first fret of the “A” string and your 3rd
finger on the “D” string on the third fret. Play this twice. Then,
notice on the tablature that you will be playing on the same string for the
rest of this measure. To play this accordingly, use your 1st finger to play
the first fret on the “A” string. Play that twice in a picking method.
Then use your 3rd finger and play the third fret on the same string once. Then
play that first fret again one time, then pick and lift off of that “A” string.
That will be the last open note of the measure.

The last measure is played in much the same way, so go ahead and place your
fingers accordingly to the beginning of the third measure. Play that twice,
and barely accent that note a third time. To end the last measure, simply pick
the “A” string on the first fret and you are done.