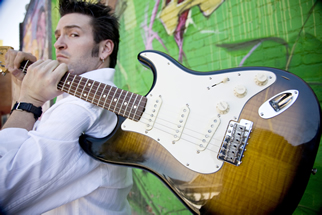 MIKE ZITO discovered his love for rock n roll after receiving a Van Halen record for his birthday. He eagerly picked up an electric guitar and headed to his local guitar shop in St. Louis, Missouri. There he found the legendary Chuck Berry and Bennie Smith who played in the store. Zito soaked up the sounds from the shop, and at 19, burst out on the St. Louis music scene. His first independent release, “Blue Room,” was released in 1996 and featured “Hollywood” and “Pull the Trigger.” His sophomore release “America’s Most Wanted” showcased his song writing skills as well as his pop sensibilities and intense guitar work.Following a crazed touring schedule, Ztio released “Slow it Down” in 2004 and played 250 shows in 2005. Touted as “soulful pop,” his 2006 release “Superman” blends his formative influences with rising artists such as John Mayer. The last release allowed him spots touring with Chuck Berry, Fabulous Thunderbirds and more.

In 2007, Zito crossed paths with Randy Chortkoff of Delta Groove Music and within months they penned a deal with new management and larger audiences. Zito has just begun his musical adventure.

MySpace: myspace.com/mikezito5150
“He is equal parts a singer, songwriter, and guitar player and he is damn good at all three aspects.” – Jim Stick, American Blues News