How To Use A Compressor

What does a compressor do? Compression is probably the most misused effect that is used by guitarists. This misuse is probably a result of the fact that many players do not understand what compression is or what it does. When a new guitar player gets a hold of a new effects unit they expect that it is going to alter the sound of the guitar in a very noticeable way. A compressor is not this kind of effect. Think of it as a ghost in the shadow of the effects chain. If you weren’t looking very hard for it you would not even notice that it was there.

You may be asking yourself why you would want to spend money on an effect that was hard to even notice. Lets look at it another way. Imagine that you are making your favorite recipe. You add all your main ingredients but it needs just a pinch of salt to make it just right. You don’t really taste salt by itself but it made all the difference in the world in the flavor. In the same way that the salt made the recipe, compression can make your guitar mix. Think of all the other effects like reverb, distortion, delay, etc.. as the main ingredients. Now add a pinch of compression and you have an award-winning recipe for sound.

So what exactly is a compressor? A compressor is a signal processor that is used to reduce the dynamic range between the softest and loudest parts of the audio signal. Think of the sound of your guitar as a wave. There is a peak where it is at its highest level and a trough where it is at its lowest. In the example below you will see signal wave with two lines running through it. The upper line represents the highest peak you can go to before your signal distorts or clips. This we will call the ceiling. The lower line represents the quieter or lower part of the signal that either is inaudible or gets drowned out by the rest of the band playing. This we will call the floor.

If you add a compressor to this signal it is going to close and lower the signal of the guitar if it starts to go above the ceiling and open and let more signal through when it starts dips below the floor. Now you won’t have clipping for the louder parts and the quieter parts will be heard in the mix. The signal would now look more like this.

Compression can be used on any single instrument or on the mix as a whole. Many bands and studios use compression on vocals because of the dynamic range of the human voice. Very high notes take more power to belt out and will sound louder that the low notes that sound softer because of the lack of power used to hit them. Using the compressor will make the singer have a more consistent range of volume. It also works great for live applications where the singer is constantly moving their head toward and away from the microphone. Bass players us compression to make a smoother sounding transition between notes.

One of the benefits to compression on a guitar is the longer sustain of notes or chords. As the signal is starting to dip below the floor the compressor will open up and let more signal through.            This will allow the signal of the guitar to be audible longer resulting in more sustain.

It is very important to understand that compression can be overused and cause your signal to sound flat and weak. Just remember the analogy above. It is a seasoning, not a main ingredient.

Limiters: Limiters are quit similar to compressors. As we talked about earlier a compressor reduces louder signals of your instrument. Unlike a compressor a limiter completely cuts the signal off at the threshold. It is a great device to save your sound system from hitting levels that can damage or destroy it. It will not let your signal go above the maximum level you set it at. So unlike a compressor the limiter is only going to deal with the louder levels of your signal.

Expanders: Expanders are completely the opposite of compressors. Whereas a compressor is going to reduce your signal into a set parameter the expander is going to widen that signal within set parameters. Why would you want to do that?? An example of the use of an expander would be finger-sliding sounds on an acoustic guitar. Lets say that you have the finger sliding sound coming through your mix on the lower end of the audible signal. If you expand or exaggerate the signal dynamic width it will push this sound further down into the mix so it will not be so pronounced. Another example would be breathing sounds from a singer at the microphone. Again if the signal is expanded it pushes unwanted sounds further down the audible signal. An expander is usually used to reduce unwanted background noise in the mix.

Gates: A gate works like a limiter but at the other end of the signals dynamic range. A gate cuts the signal off below the set parameters level. Unlike the compressor which pulls the lower level sounds up, a gate chops it off completely.  Like an expander it is used to keep unwanted background noise out of the mix. One very common use of gates is miked drums. When the drums are miked up individually you do not want other drums sounds bleeding into the wrong microphones. The gates cut off the signals bleed over from other drums and clean up the mix. This is effective in keeping the cymbal sounds from bleeding over onto the tom tracks. It is used most dynamically on the snare drum mike and hi-hat mike because of their close proximity. Gates work well with guitar for eliminating the hiss and unwanted noise that is heard when the instrument is not being played.

So where should these effects be put in the effect chain??

There are two schools of thought on where to put compression in the effects chain. The first is that it should be at the beginning so a smooth clean signal hits all of the other effects. I do not buy into this method personally I know that some effects are going to cause the signal to clip again. The method I like to do is to put it after all the effects except the echo effects like reverb, delay, chorus and flange. I want to compress all the effects in the signal but let the reverb type effects fade out naturally. Both methods work for different people so you will want to try them both, and see which works best for you. These methods also apply to limiters and enhancers. As far as a noise gate goes I like them at the end of the effect chain so the cancel out any residual noise caused by the effect unit, especially flange. Flange has a tendency to cause a lot of background noise when the guitar is not being played. 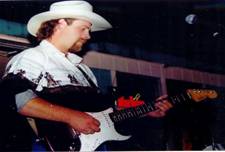