How To Read Chord Diagrams

Below is a blank chord diagram. Think of it as a picture of your guitar sitting in front of you.

Putting Notes On The Diagram

Black dots on the diagram tell you what fret and string to place your fingers. Numbers inside the dots tell you which finger to use.

Here’s how the fingerings are mapped out on your hand: 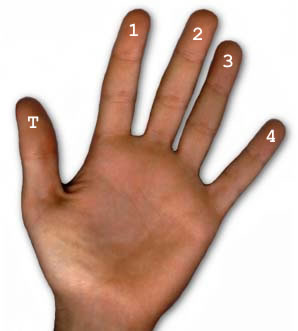 To play the chord on this chart, place your 2nd finger on the 2nd fret of the 5th string and strum all six strings.

If you see an “X” on a chord chart that simply means that you do not strum that string, otherwise all strings are played. In the example, A chord below you’ll see an “X” over the 6th string. This means that the string is not used in the chord, so you will not strum it when
playing the chord.

All chord diagrams are not created equal. Sometimes you’ll see a diagram with no white dots to indicate open strings, but you’ll still have an ‘X’ to indicate strings that are not strummed.

Take a look at these examples (the same two chords we learned above):

If an X doesn’t appear above the string and the string is not stopped (fretted) then you’ll assume that the remaining strings are played open.