How To Play Slide Guitar: An Overview

Sliding is an effective technique for creating a very vocal, wailing sound on your guitar. It is popular with many lead guitarists, especially in blues.

The very first thing that you should know is that in this lesson case the guitar is tuned to open G. That means that you’ll hear a G chord when all six open strings are strummed.

You can use the audio below to help you get in tune if you don’t have a tuner handy. I play each note 3 times starting with the low D string (or the low E in standard tuning) then you’ll hear all six strings strummed together:

2.) Grab a slide and place it on your pinky finger (4th finger).

There are many different types of slides you can buy, and they aren’t too expensive.
Some claim that you can use the bottleneck of a bottle, but really that is a little
dangerous unless you’re a handy man and can sand down glass.

I would just recommend going to your local music shop and purchasing one.
Lately I’ve even seen slides at Wal-Mart. Doesn’t EVERYONE have a Wal-Mart?

3.) View this picture and make sure you have your fingers in the same position. 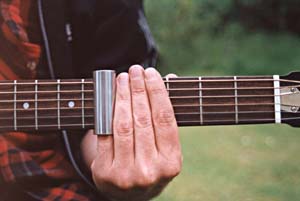 Some people prefer the slide on the 3rd finger, but I have found it works best on the fourth.

Note: It’s always a good idea to view the tablature that you are playing BEFORE starting to actually play the slide part. If there comes a time where ONLY slides are being played, or in other words – no actual ‘fretting’ on any finger, you may be able to use your 1st finger. I do that quite frequently, but do this ONLY after you have investigated the tablature and made sure that you don’t need to use any other fretted fingers in the given song.

To prevent unmusical noise, you should wear the slide on your pinky and lightly rest your other fingers below the slide (i.e., between the slide and the headstock). This also keeps your first three fingers free to make chords and play single string non-slide licks.

If you are going to be fretting the notes without a slide at the same time, you will need to use the slide on either your 3rd or 4th finger.

4.) Make sure that your slide is ALWAYS perpendicular to the strings being played.

5.) Now, cover ONLY the string(s) that will be affected with the slide. That will keep you from having to dampen unwanted noise on non-played strings during the slide.

6.) Try your absolute best to place the slide almost right on the metal fret spacer in between the notes you are to play.

Here’s an example of where the slide should rest in relation to the fret. It should be right up against the fret spacer, still on the same string that you want to slide on, but NOT in the middle of the fret. Remember, if this was the fourth fret that the red line rests on, you are actually closer to the 5th fret than the 3rd fret, as shown below.

7.) Simply move your slide back and forth on one string to hear what it should sound like.

When playing slide guitar, it is ideal that you have a very high-action guitar neck. Strings that sit real close on the fretboard will be harder to play than a raised-action guitar. An acoustic guitar that offers a nice slide is the Ovation Celebrity, which has real high-action. It’s much harder to play barre chords on it, but it’s easier sliding.

8.) Practice moving around the fretboard, one note at a time, until you hear what a desired slide should sound like.

It’s hard to explain what a slide should sound like, but once you hear it – you’ll just know you have it down. We’ll get into that further down.

If you play in regular tuning, you will have to dampen the strings that you are not touching because they will sound wrong.