“Got Me Under Pressure” by ZZ Top 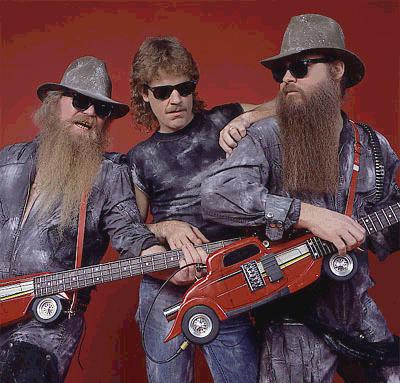 Where to find this song – Eliminator track #2

Formed in Houston, TX in 1969, Gibbons was formerly with the band “The
Sidewalks” and Hill & Beard were from “The American Blues
Band”. They got together, and the following year they released
their debut album, appropriately titled “First Album”. ZZ
Top released “Rio Grande Mud”, in 1972, which produced the
hit “Francene”. They went on tour and opened for The Rolling
Stones, which greatly increased their fan base.The following year,
they released their first top 10 album, “Tres Hombres.” It
featured the hit “La Grange” and was their first album to
be certified platinum. In 1976, they released “Tejas” and
embarked on the infamous World-Wide Tejas tour that included live cattle,
rattlesnakes and cactus on stage! After the tour, the guys took some
time off then finished the seventies with “Deguello” which
included covers of Sam and Dave’s “I Thank You” and Elmore
James’ “Dust My Broom”. ZZ Top’s bestselling album, “Eliminator,” was
released in 1983. The album contained the hit singles, “Gimme
All Your Lovin”, “Sharp Dressed Man”, “TV Dinners” and “Legs”.

This riff is compromised of two guitar parts. Here’s what they sound
like together:

Both guitars will be “palm muted” (P.M.) throughout the
riff. A palm mute is when you allow your pick hand to rest on the strings
not being played. Guitar 2 will be performing a “pull-off.” (See
instructions on the second part below). Guitar 2 will also not come
in on the first measure of the song, which is why there are no notations
at the beginning of the measure.

Begin this part by barring the “A” string, the “D” string,
and the “G” string on the seventh fret with your 1st finger.
Now, before you actually play anything, notice that it calls for you
to play the ninth frets on the “D” string and the “G” string.
Do this by placing your 3rd finger on the ninth fret of the “D” string
and your 4th finger on the ninth fret of the “G” string.
Now, this is when you start playing. By allowing your 1st finger to
be barred, that will help you along the way and keep your finger movement
to a minimum. The “pull-off” is coming next. A pull-off is
when you go from a higher note to a lower note, only striking the first
set of notes. Strike this power chord formation once and pull off with
your 3rd and 4th fingers. Next you will simply play the barred seventh
frets once, and then put your 3rd and 4th fingers back where they were.
Now that you have done that, simply perform the same step from the
beginning and you are finished with the second guitar part’s riff!

Complete Transcription
To “Got Me Under Pressure” (PDF)

Complete Transcription
To “Got Me Under Pressure” (Power Tab)