Flick Of The Switch by ACDC 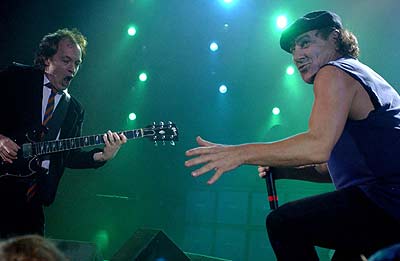 Ahh, the bad boys of rock. Angus Young is one of the most energetic and flat-out spazzes of ANY generation. With his black sportscoat and schoolboy plaid shorts, he is by far the center point of the band. Bon Scott was the original singer, who actually wanted to be the drummer. After his death, Brian Johnson took over the position and according to many, sounded much like Bon Scott. Some of the band’s music became the theme soundtrack for “Maximum Overdrive,” a movie by Stephen King.

This song is pretty fun to play. The first and third measures are the same, as are the second and fourth.

To play the second measure, place your 1st finger on the “low E” string on the first fret. Notice here that you will go from the first, then to the second, then to the third, and then to the fourth fret. A good way to remember this is to relate the finger positions that we usually use to the fret numbers. ( Example: 1st finger = first fret, 2nd finger = second fret, 3rd finger = third fret, and 4th finger = fourth fret.) Understand? Pretty easy? Ok. Now, to play this last part of the second measure, simply use your 1st finger on the second fret of the “A” string. Play that once, and use your 2nd finger to play the third fret once. If you just leave your 1st finger where it is, all you have to do is let off of the third fret and you have finished the measure. That is it for the riff!

Complete Transcription To “Flick Of The Switch” (PDF)

Complete Transcription To “Flick Of The Switch” (Power Tab)