Eclectic Effecting 101: How to Use Stock Pedals to Unlock New Sounds 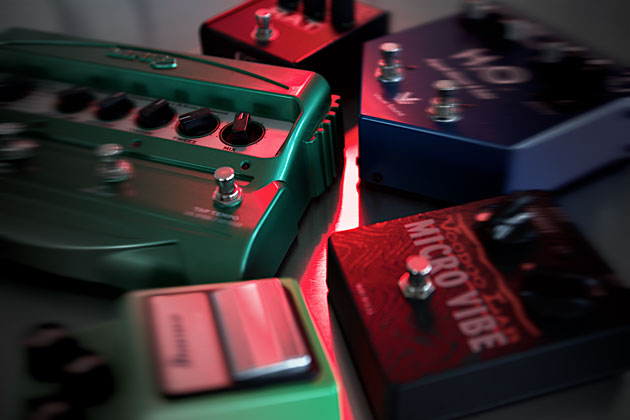 Have you ever wondered how to combine guitar effects to create unique and unusual sounds? If you’re willing to experiment and think creatively about your gear, it’s not too hard. For starters, let’s agree on one thing: a new guitar color means very little if it lacks a musical context. Without a song or composition to frame your sounds, you’ll quickly become that self-indulgent internet guitarist who just bought the latest gadget and insists on showing it off with no point of reference or practical application.

Conversely, consider Tom Morello’s brilliant use of the DigiTech Whammy pedal in Rage Against the Machine’s “Killing in the Name,” or Adrian Belew’s pachyderm-inspired trumpeting (which he purportedly created using an Electro-Harmonix Big Muff running into a Deluxe Electric Mistress flanger) on King Crimson’s “Elephant Talk.”

Think about the Beatles, who always wrote a great song first and then modified it with effects. This is true for “I Need You,” with its subtle volume swells, which John Lennon created by manipulating the knobs on George Harrison’s guitar while he was strumming the chords. Another Fab Four highlight is “I’m Only Sleeping,” which features some out-there (for the time) backwards guitar sounds that were created by flipping over the tape.

So do yourself—and your listeners—a favor and put your new sounds in an environment that displays musical creativity, not simply gear lust. To help you reach that goal, we’ll explore different ways to coax fresh sounds from an assortment of pedals, and then showcase these colors in a variety of musical settings.

Mix and Match
For these particular sound experiments, I was fortunate enough to borrow some gear from various friends, which I augmented by rummaging through my own meager collection. But don’t let this vast selection of gear dissuade you from taking the plunge into sound design. You don’t need to have these specific brands and models of pedals to try out the following ideas. For the most part, my pedal choices were rather ordinary. I focused on the basics—chorus, flange, rotary, delay, and distortion—with the occasional modern or boutique pedal thrown into the mix. Ultimately, it’s about generating compelling sounds with the gear you have at hand.

On all the sound clips, I played an American Standard Telecaster equipped with JBE HB humbuckers. I used a variety of amps—all clean and with the reverb off—including a Fender Princeton Reverb, Fender Deluxe Reverb, Marshall JCM 900, and a Marshall G80R CD. But honestly, the amps made very little difference because all I needed was a clean, full sound.

Laser-Gun Guitar
Let’s start with something relatively straight-ahead. Clip 1a offers a space-age effect with a playful, sci-fi feel. This sound gives the impression that you’re tremolo picking, when you’re actually playing only one note at a time. To that point, a tremolo pedal could work, but I’ve found that most flangers pulse faster than most tremolo devices. A fat, distorted tone is particularly helpful for this sound. (If you elect to go clean, use heavy compression.) One of the tricks to using this sound is to match the song tempo to the pulse of the effect. In this clip, the tempo is 140 bpm.

I started my signal with an MXR CAE Boost/Overdrive with all knobs, except the boost, set at 50 percent. From there I ran into a Boss BF-2 Flanger with the rate maxed out, and the depth, manual, and resonance at 50 percent. In Clip 1b, you’ll hear the short riff without any effects.

Arpeggios: More Than Meets the Ear
Keyboard arpeggiators have been around for decades. Duran Duran’s “Hungry Like the Wolf” keyboard intro is a prime example. Some might also point to the Who’s “Baba O’Riley,” but my research suggests that was generated by a Lowrey organ marimba with the repeat function on. Still, it’s a similar effect. An arpeggiator pedal will generate a stream of arpeggios or scalar runs after you hit a single note. Sometimes they can sound stiff and lifeless, but adding in another effect can give the sound a new dimension.

In Clip 2a, the guitar just goes through an EarthQuaker Devices Arpanoid set to run a minor-scale sequence. Pretty funky, huh? In Clip 2b, I added a Boss PS-6 Harmonist set to harmonize down a perfect fifth. At about 0:22 into the clip, I added a TC Electronic Flashback 2 Delay set to reverse with almost no feedback, and a delay time that matches the tempo. I also put a 1960 Old World Compressor at the beginning of my signal chain, so the sequence doesn’t decay as quickly.

Time for Techno
These days there are plenty of synth-emulator pedals, such as the DigiTech Dirty Robot, the Pigtronix Mothership, and the Subdecay Octasynth, just to name a few. As great as these pedals sound, if you really want to emulate a classic ’70s or ’80s synth, I recommend you connect your synth pedal to some sort of modulation effect. We’ll use the most ubiquitous one—a chorus.

For this example, I plugged an Electro-Harmonix Micro Synth into an Analog Man Bi-Chorus. The Micro Synth is dialed to an Arp Synth setting I nabbed from the company’s very helpful templates. The trick here is to make sure you have enough modulation effect to give the synth depth and movement, but not so much that it throws the synth sound out of tune. I’ve set both the speed and depth to about 60 percent. Clip 3 is pure ’80s synth, à la Yaz or Eurythmics. The transformation is so drastic that one could be excused for doubting this is a guitar.

Faux-Synth Fuzz
“Well, that’s just fine,” I hear you say, “but what if you don’t have a synth pedal?” The fact is, you can emulate certain synth sounds with just about any high-gain or high-fuzz distortion pedal running through any stomp that adds movement to your signal. For faux-synth fuzz, I’m usually partial to boxes that let you adjust the bias, such as the EarthQuaker Devices Dirt Transmitter. It can go from ultra-thick and smooth fuzz, reminiscent of a Les Paul through a Hiwatt stack, to a tone that sounds like a slowly dying 9V battery. I then run the fuzz through something like a JHS Unicorn vibe effect.

But for this example, I used a Keeley Dark Side, which contains a multitude of sounds in one small unit. For Clip 4, I set the Dark Side’s fuzz to maximum and the fuzz filter to 50 percent. On the mod side of the pedal, I maxed out the U-Vibe’s depth and chose a rate of 50 percent. The result: an ultra-clean distortion with a pulsing triplet feel and very little attack tone.