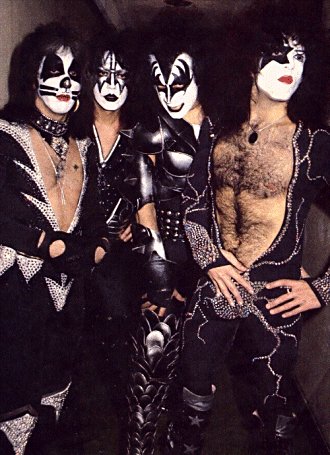 Where to find this song – KISS track # 4

Halloween. Make-up. Giant boots. Fireworks. KISS knew exactly what they were doing. They were breaking ground for a genre of music for the 70’s. This song was actually about the only thing that Ace Frehley claimed to need-a drink.

Then move your 1st and 4th fingers. Leave your 3rd finger in its place for now. Move the 1st finger to the fourth fret on the “D” string, and the 4th finger to the seventh fret on the “B” string. There is another way to play that chord though. If you would like, and as you will see in the video, you can use your 4th finger to barre the “G” string and the “B” string on the seventh fret and it will keep you from having to shuffle your fingers so much (remember to keep your 1st finger on the fourth fret on the “D” string). Strum that one time. The last note of the measure will take you back to what you just played two notes ago, so go back to the fingers you just moved and simply place them back where they were.

Next you will see that the first part of the second measure will be accented from the last note you played of the last measure. After you have accented that note, play the next note by placing your fingers once again how you used them in the third set of notes from the first measure by using either method as said above.

You begin this part by barring on the second fret the “D” string, the “G” string, and the “B” string with your 1st finger. Try to avoid barring the “high E” or just remember not to strike it. Once you have done that, simply leave those fingers there and with your 2nd finger hit the third fret on the “B” string. At the same time place your 3rd finger on the fourth fret on the “G” string.

For the last part of the measure, lift your fingers off of what you just played, and as long as you kept your 1st finger there for the barring, then just strum twice and you will have it!