“Burning Down The House” by The Talking Heads 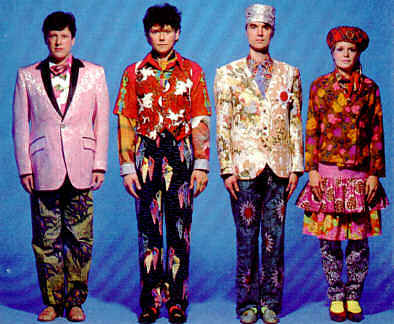 Where to find this song – Stop Making
Sense track #4

David Byrne was born on May 14,1952, Dumbarton, Scotland, but was raised
in Baltimore, Maryland. He was briefly a student of the Rhode Island
School of Design. He abandoned his training in visual and conceptual
arts in favor of rock. After relocating to New York’s Lower East Side,
Byrne formed Talking Heads in 1974.

When playing the opening part to the song, allow your fingers to relax
and attempt to float along the fret board while playing. We start the
song off on the “D” string. Begin the song by playing the open
note string ( the “zero” note ) twice. After playing that,
you will go to the third fret on the same string. The best bet is to
use your index finger on all of these parts in this phrase ( play this
song much like when you play the bass using only one note and one fret
at a time). A “pull” on guitar is when you are slightly bending
the string just enough to accent the note being played. In this case,
what you will want to do is accent that third fret and immediately pull
off lightly back to the open position on the “A” string. That
will give you the sound you are looking for. Most of this lesson is performed
that way. After you have done that, you will want to do the same with
the fifth fret, but play the open note twice after you have let off of
the fifth fret. If you look at the tab below you will notice that you
are going to be playing this particular phrase until the end of the second
phrase, so get comfortable with it. Rinse, lather, and repeat. Remember
to allow your fingers to flow, much like in the style of Dave Matthews
and David Gray. If you notice, almost all of their songs are based around
a very flowing sense of arrangement in their progressions. Same here,
with just a bit of a style difference.

Ok, now that you have gotten the first part down. ( You do have it right?)
You will want to play what you just played before up until after the
second time in the second phrase. ( Remember, two times for second phrase)
After that, you are going to want to move to the “G” string
and play the fifth fret using your index finger, then directly onto the
third fret on the same string using your ring finger. Simply move now
back down to the “D” string and play the same thing you just
played. ( fifth fret on “D” string directly onto the third
fret of the same string.) That is it for this lesson. Keep practicing
this riff over and over and you will find that it gets much more comfortable
as you play along.

Complete Transcription
To “Burning Down The House” (PDF)

Complete Transcription
To “Burning Down the House” (Power Tab)