Build Blazing Speed On Guitar With These Tips 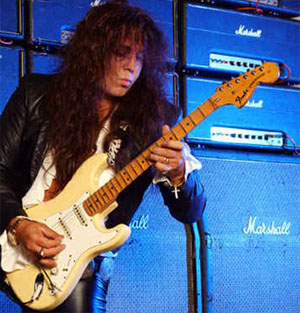 Note: We are experiencing audio technical difficulties due to a new computer system we have installed. This problem should be fixed soon, but in the meantime, we’ll still keep producing content for you to work with.

This lesson has to do with building speed using tablature drills, and finally using a snippet from “Blitzkrieg” by Yngwie Malmsteen to really get your practice up to par.

This lesson is for acoustic or electric. Every file on this page can be played with virtually any instrument for a great practice routine!

Most guitar players think the basis of real speed is a good fret hand (generally left hand) technique. If your left hand is fast, you will be able to play fast. So, many players train mainly their left hand, and the right hand is kind of left behind. It’s rare to have a complete workout for your picking hand (generally right hand) until now.

Here is a lesson for all you players who want to play real fast but don’t know how! Believe me – it will work. This is a guide to the best and fastest right hand picking technique: ECONOMY PICKING, the key to real speed!

What Is Economy Picking?

As I have already said, economy picking is the best picking technique there is. It’s fast, it looks mighty fine, and it requires very little effort (once you have mastered it of course). But to experience the comfort of economy picking, you must first understand the concept of it. To keep a long story short: economy picking is a mixture of firstly alternate picking, and secondly, sweep picking. Now the explanation of these two techniques:

1. Alternate Picking.
A basic technique. Most of you players will be familiar with it (unless you’re still a beginning player). Alternate picking means: constantly switching between down- and upstrokes with your pick (to make things easier: down-up-down-up-down-up-…) This technique doubles the speed you reach by only down- or upstroking.

This is a more advanced technique, used to play notes that are on strings next to each other (like arpeggios, see arpeggio lessons), rather than notes on the same string. You actually “sweep” your pick over the strings, as if you were strumming a chord, but you don’t let the notes ring as if you were playing a chord. You play each note individually .

Now that you know both techniques, you might ask the question: how is economy picking related to these techniques? To answer this question, I will use a small exercise as an example. Firstly, I will show you how this pattern would be played if you used alternate picking (like most guitar players).

You can see clearly, you constantly alternate between down- and upstrokes. Now I will show you the same pattern, played with economy picking:

Like alternate picking, economy picking consists of alternating down- and upstrokes, except when changing strings. You use the “sweeping” motion for this: if you move a string down (e.g. from the 6th to the 5th string), you use downstrokes (for the sweeping motion, use your wrist movement)þ If moving up, you use all upstrokes, like this:

Practice these patterns as much as you can, and try to play the notes as even as possible. Many players who start practicing economy picking complain that the notes sound uneven or that it doesn’t go faster than alternate picking. Believe me, it does. You just have to master it properly to play even and fast. (Note: the PTB file is ONLY meant as a reference. It doesn’t matter how fast or slow – or even more importantly – whether you use quarter, whole, half, or eighth notes. This is because everyone works at their own speed and the concept here is just to drill some patterns into your head. That’s why the PTB file is just a basic audio reference.)

Now that you know what economy picking is, you can grab your guitar and start exercising. I don’t like to do exercises myself, but I do them anyway. And that’s what you should do, if you want to master economy picking and play real fast real easy! I will give a couple of exercises as examples, but you can of course invent your own exercises if you want! Or play existing songs as an exercise (like I usually do).

These are the patterns I used above. I repeat them because they are so important: before playing anything fast, use these exercises (and the exercises below) as a warmup! You should use Exercise Set 1 to train speed, and to play every note evenly and smoothly.

These exercises are based on the first exercise set, but I added left hand fingerings too. The exercises in Set 2 are therefore used to train the synchronous movement of fret and pick hand. This is very important if you want to play fast! Do these exercises every day!

So, in these two exercises, there are 4 notes per string, but you do only 3 picks per string, and 1 hammer-on/pull-off.

Economy picking is the key factor of speed. But still, there are guitar players using economy who still aren’t able to play fast. Why is that? Is it because of a slow left hand? Or is there still a problem with their picking technique? As I’ve already said, the left hand is usually more than fast enough. You can try this yourself: give your right arm a rest, and use only your left hand. Try to play a fast guitar riff (for example, a Major scale) with only your left hand. You don’t have to hear the notes: just try to get the left hand fingerings right. It goes much faster than you would be able to play with both hands, doesn’t it? This means, there’s still a problem with the right hand picking technique.

What Part Of The Pick Is Used To Pick With

The pick is approximately 3 cm long and 2, 5 cm wide. You use the sharp pointed side to pick the strings with. I know, it’s the basic of all basics, but there’s more. You know that you have to pick with the sharp edge of the pick, but do you know what part of the pick actually touches the string, in order to achieve maximum speed? The trick is to touch the strings with the tip of the pick. I mean, the very tip of the pick. Only the slightest touch of the string with the pick is enough to produce a clear sound. Most players really “pluck” the strings with their picks, mostly because their right arm muscles are overstrained. If you relax, you will find this subtle string-touching much easier!

Knowing this, and combining it with economy picking, allows you to play real fast! Economy is based on smooth right hand movement, but if you “pluck” your strings instead of just slightly touching them, this smooth movement is impossible. So, relax, touch your strings slightly instead of plucking them, and you will play fast in no time!

Why is this? Well, if you hold your pick at the described angle while moving over the strings, you “stroke” them instead of plucking them, resulting in a much smoother movement. And like I’ve already said: economy picking is based on a smooth right hand movement.

Note: when moving up, the sharp edge of your pick should point down. This may feel uncomfortable for your wrists at first, but after some exercising it shouldn’t be a problem.

As a conclusion, it’s time play a riff that will help you in ‘Economy Picking.’
It’s a fragment out of Malmsteen’s “Blitzkrieg”.

Good Luck!
Note: I’m not adding right hand fingerings, you should be able to find out for yourself by now!

This should help alleviate any frustration you may have about getting up to speed when picking. Though this isn’t ALL there is to it, the exercise in which you have downloaded and read about will most definitely be a great workout for your practice sessions.