Bold As Love by Jimi Hendrix 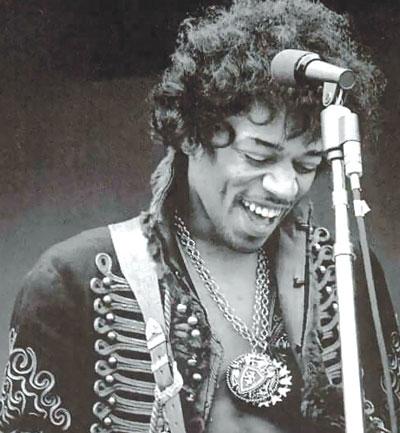 Before this song confuses you too much, here is Verse 1 and Chorus 1 altogether, with all guitar parts:

Measures 1 – 4 only have one guitar part – Guitar I. This is the main guitar played by Hendrix.

What we have done here is attach Guitar I to the added part for Guitar II. You have already played Guitar I, but it’s important to see where Guitar I and Guitar II line up. Here is Guitar II, which is played simultaneously with Guitar I (This part comes in at Measure 5):

Remember – an easy way to not lose track of which part you are playing is that the added guitar is only playing one string at a time.

Now let’s add the OTHER part – Guitar III. As you can see, this guitar part comes in at the very end of the Verse that you have played. You will also see that the part we just worked with (Guitar II) is also shown below. You’ll see where the 3rd guitar part comes in now that you can recognize the 2nd guitar.

Guitar III begins the sextuplets and moves straight into the Chorus.

Guitar III comes in at the end, as you see above. However, instead of breaking JUST that part down, We’ve reserved the audio for the entire Chorus below.

Here is Guitar I by itself:

Again, there is another guitar part added. This time it’s NOT Guitar II though. It’s a revisit from Guitar III from the end of the first Verse, still playing sextuplets.

Here is Guitar III played in full for the Chorus:

Notice that we separated it from Guitar I because it plays throughout the Chorus like Guitar I. Guitar III can stand alone as a guitar part in the Chorus by itself.