“Blitzkrieg Bop” by the Ramones 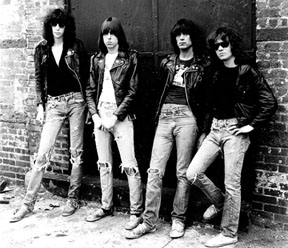 Where to find this song – The Ramones track #1

Most people know that The Ramones were the first punk rock band. Some
of the other bands such as The Stooges and The New York Dolls actually
came before them, and set the atmosphere for bands like The Sex Pistols
to make the violence in “punk rock” become more controversial.
The Ramones, however, set in stone what most people consider true punk
rock. By cutting rock & roll down to its bare essentials — four
chords; a simple, catchy melody, and unintelligable lyrics — and
speeding up the tempo considerably, the Ramones created something that
was rooted in early ’60s, pre-rock & roll and pop but sounded so
revolutionary and honest…..even if they never cared about fame…..they
got it.

The entire song “Blitzkrieg Bop” is made up of what we like
to call power chords.

Power chords can be fun and easy to play. You can hear them in all
types of music, but most people associate them with hard rock styles
of music.

Power chords are not really chords. Chords are 3 notes or more, whereas
power chords only have 2 different notes. A more correct name would
be “power intervals” because they only contain two different
notes. Usually power chords are composed of the root, a perfect 5th
interval, and the root note doubled at a higher pitch (called an octave).
Basically they are just like playing perfect 5th intervals and doubling
up a note or two.

Power chords are easy to play just about anywhere on the neck, but
lend very little harmonic texture to a song. They do not have a major
or minor third interval. A chord needs this interval in order to make
it a major or minor chord.

If you’re playing a song with a lot of distortion, strumming a full
chord might create too much dissonance. Plus if you have a fast chord
change, it’s often easier to use power chords for the really fast part.

There are two basic power chord patterns in this song:

Begin the riff by placing your 1st finger on the fifth fret on the “low
E” string. Place your 3rd finger on the seventh fret on the “A” string.
Play that eight times, and then move to the “A” string with
your 1st finger on the fifth fret. Place your 3rd and 4th fingers on
the seventh frets on the “D” and “G” strings. Play
that once, and then just move to the seventh and ninth frets with your
fingers still in the same arrangement. Remember that a power chord
leaves a space ( one fret width) in between your finger arrangement.
Play that about four times.

The fourth measure is the only place you will see a bit of a difference
in the intro/verse. Play this measure by combining what you have learned
in the first, second, and third measures. Notice that the power chord
didn’t change from the first notes that you were playing. Just look
at the tablature and play what is shown, and then move accordingly
to the “A” string.