“Best Of You” by Foo Fighters: Part 1 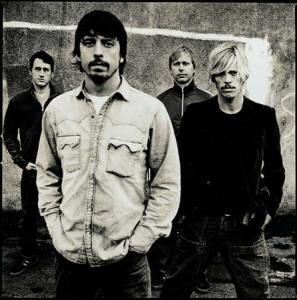 Frontman and founder Dave Grohl, originally the drummer for Nirvana,
and co-conspirator to a new wave of rock music, has slated the release
date for their new album, "In Your Honor," from June 8, 2005,
to June 14, 2005. The album’s title, In Your Honor, came after Grohl
spent time on the campaign trail with John Kerry. "We’d pull in
to small towns, and thousand of people would come to be rescued by
this man," says Grohl. "It’s not a political record, but
what I saw inspired me." The title track spurs the electric disc
(which features making-of footage on the flip side). "I wanted
to have songs that make people beat the sh*t out of each other the
first time they hear them," Grohl says.

When asked what type of mood to expect for the highly-anticipated
fifth commercial album, Grohl responded, " “When someone
comes up to you and asks which Led Zeppelin album they should buy,
you should say ‘Physical Graffiti." He adds, "And, in 20
years, when your kid comes up to you and asks which Foo Fighters album
he or she should buy, I want you to say ’In Your Honor’." His
statements should ring true, mainly because it seems that the Foo Fighters
have come a long way even since their last album, "One by One," which
appeared almost three years ago. We can only assume that within this
three year hiatus, the sneak-peek into "Best of You" and "Resolve" will
be reminiscent of their 1997 album, "The Colour and the Shape." In
this album, the band focused on driving rock guitar and jack hammer
drums.

We can only hope for the same with the new album. As Grohl explains
on their previous album, "One by One," I was kinda pissed
at myself for the last record. Four of the songs were good, and the
other seven I never played again in my life. We rushed into it, and
we rushed out of it." For "In Your Honor," the Foos
— Grohl, drummer Taylor Hawkins, bassist Nate Mendel and guitarist
Chris Shiflett — worked to broaden the spectrum of their music. One
disc consists of acoustic songs performed live by the band, and Norah
Jones lends her vocals to the jazzy "Virginia Moon." The
other disc contains ten of the most intense Foo tracks ever written,
including the first single, "Best of You." "In the beginning,
this album was such a stupid idea," Grohl says. "It was ‘Let’s
buy an 8,000-square-foot warehouse, build the nicest studio in L.A.
and make a double album in six months." The acoustic disc (which
is in the DualDisc format, with a 5.1 audio mix on the DVD side, much
like "Devils and Dust" by Bruce Springsteen) opens with the
song "Still." "I couldn’t believe that our band is capable
of making something so beautiful," Grohl says.

The track contains an acoustic drenched in reverb, strings, organ
and a resonator drum that sounds like a bomb exploding. It’s one of
the most personal songs Grohl has ever written, about a kid in Virginia
who committed suicide on some train tracks. "After the ambulances
split, we found pieces of his skull and we played with his bones," says
Grohl, who was 10 at the time. "The acoustic album runs deep." John
Paul Jones, who plays piano on "Miracle" and Mellotron on "Oh
Yeah," sent the band into true nirvana. "If I say it’s the
greatest thing that happened to me in my life," says Grohl, "my
wife will get mad, so it’s the second greatest." Says the Zepp
bassist, "I’m a big fan of the Foos, and it just so happened that
I’d be in L.A. for the Grammys. We got on like a house on fire."

The Foo Fighters are scheduled to begin touring through the summer
at T In The Park and The Carling Weekend : Reading and Leeds festivals,
culminating both arena rock and more intimate acoustic sessions throughout
cities worldwide. Look for the album in mid June!

Complete Transcription To “Best
Of You” (PDF)

Complete Transcription To “Best
Of You” (Power Tab)