This lesson will show you basic guitar strumming.  Strumming is a vital & basic skill for guitarists. It can be the rhythmic engine of a song.

Strumming is the ‘brushing’ or ‘scratching’ of the strings in large strokes. Like a  pendulum, the hand continues to move (up & down rather than side to side), always keeping time.

Many players fall into the ‘pick and grin’ category where they prefer to just strum chords and sing along to a basic arraignment. They’ll completely forego the tabs! That’s okay because sometimes all you need is basic guitar strumming patterns as presented in this lesson.

To strum, you can use a pick, or the thumb, or thumb/fingers.

When starting to play guitar – when learning to strum- never stop the ‘motor hand’ until the end of the song or progression.

When you jam with drummers, watch them watch your strumming hand. It is a time-keeper.

Start with strumming just down – use open strings (don’t touch with fretting hand). It won’t sound pretty, but it will work.

Things to Keep in Mind…

Now that we have refreshed our memory on this basic concept, let’s apply a mute to it.

We started with down strumming. Let’s try the same down strum, but this time we will mute. A mute is created by lightly touching the strings without pressing.

In this case, mute all of the strings (make sure all of them are covered with the fretting fingers, and it doesn’t matter WHAT strings you are barring). You should hear a blocked sound, also known as the ‘chuck’ or ‘Klunk.’

1. You can mute all downstrokes.

2. You can mute the first downstroke, but play the second. Mute the third,
but play the fourth.

3. You can play the first, mute the second, play the third, mute the fourth.

This will now be notated (drawn) with eighth notes (a half a beat) in 4/4 time.

Again, the motion of the hand does not stop and you don’t have to hit all the strings all the time. Try this on open strings. You can also do this with mutes, and combinations of opens and mutes.

1. You can downstroke and play the first “1” and upstroke the “and” while
muting.

2. You can downstroke and MUTE the first “1” and upstroke and play
the “and” open.

3. The same applies to each and every eighth note set. EXPERIMENT!

Note: Muscles have memory. By doing this exercise above for long enough,
your arm will not want to stop once you start changing chords. Everything will start to feel like a windmill, regardless of muting or playing even OPEN notes on the guitar.

a. You will get more complex patterns by MISSING more, or muting more up and downstrokes.

Also, adding mutes to strumming creates personal style. Creating a personal style is the most worthy goal for any player. Another responsible thing to do is become a solid rhythm player by applying mutes to any set of note values, be that they are quarters, eighths, halves, etc…

These are possibilities for all of us.

Since this is an open exercise, there is no need for audio or video. The key here is to get you accustomed to the fretboard, so playing anywhere on the guitar will work just fine.

In this exercise, you should have accomplished the following:

Here are a few open variations you may want to try. Again, these are ALL open strings:

Here are all open strings being played using quarter notes, with the first played open, then muted. 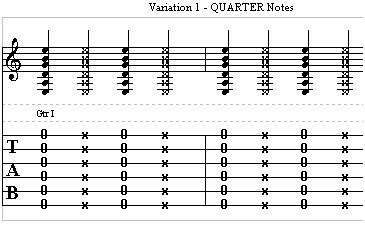 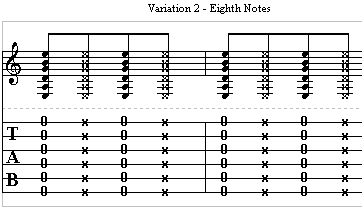 Here is a switch from starting with a mute using quarter notes, then playing the open strings. 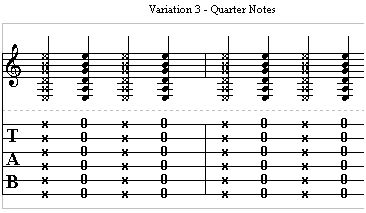 The same concept as above, but using eighth notes. 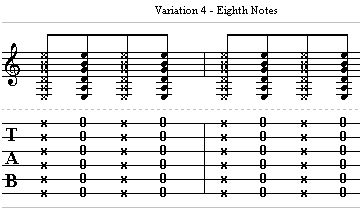 NOTE! Remember that we switch up from quarter to eighth notes within the exercise.

If you are concerned that you aren’t playing ANY chords at all, here is a suggested pattern I would use to work on muting and playing using up and down-strokes:

As used in tablature…

This run is using quarter notes. All you have to do is play the first chord presented, and then mute it. Play it again, and then mute. The same applies throughout. 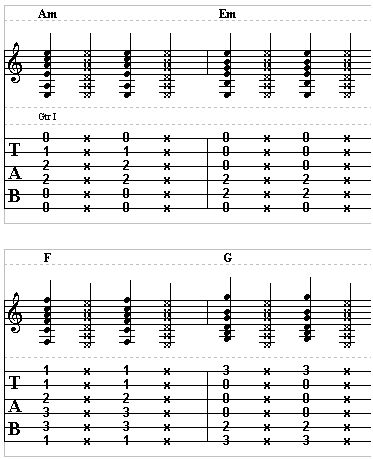 Here is the same variation, but using eighth notes. The same is applied: 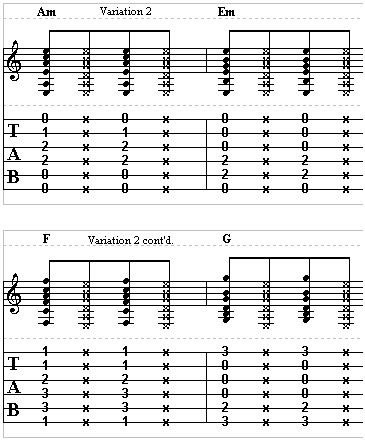 This one is different. Here you are FIRST muting the strings (using quarter notes) and then applying 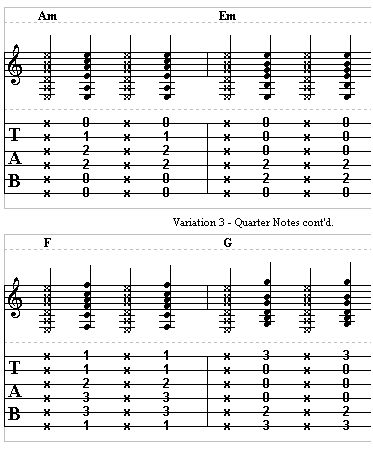 This is the same variation as above, but using eighth notes: 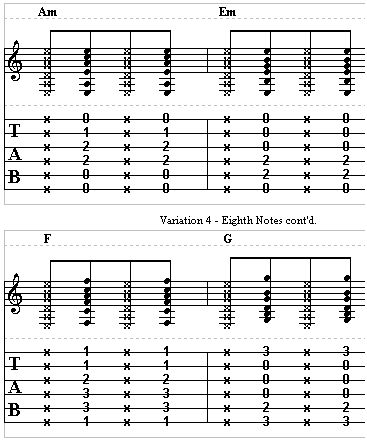