Here we’ll deal with Amending Chords and Leaving Out Notes.

You can really tell the difference between an open-string D chord and one that if you shifted the root note, the open 4th string – up to an E on the 2nd fret, you could produce an altered bass note. The notes of the D major open chord are D (1st) F# (3rd) and A (5th). If you were to treat this chord as having a root of E rather than a D, their relationships change.

Compare these two chords and it will always sound a little different, but that’s not all. By adding the flatted 7th and 11th notes to a root you can produce the ‘flavor’ of an 11th chord, but the first chord you played was without a 3rd and 5th, which produces a much fuller sound to the 11th.

It’s usually more use to refer to the original triad with an altered bass note. The logical way to write this is “D major over E” which translates to D/E. It would make much more since to use this writing method instead of, for example, D/C, which translates the long way to C6/9/b5 or C/6/9#11.

In this sequence of chord diagrams we have a full set of altered bass notes.
From left to right, an E major chord is played on the guitar, with the root
note descending in half-step intervals. Some of these are very harmonious and
others create strangely discordant effects. The process of altered bass noting
applies to major chords and other chord shapes, so this is very important to
learn. In these examples, you will ONLY play a total of four strings using
E major as our example. Period.

The root, which starts at the 3rd string, descends gradually over the bottom
three strings. So, just play the top three strings, and whatever string the
NEW root note is on. 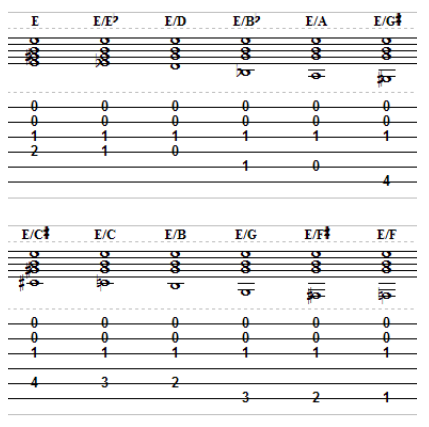