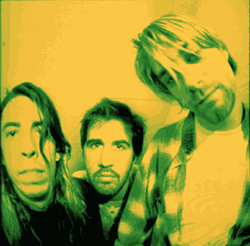 Where to find this song – In Utero track #12

Ahh, Nirvana. The grunge rock band that our parents warned us about. Kurt Cobain has become an icon in the music world in many ways like John Lennon. His knack for creating some of the most popular riffs in history has given us musicians a reason to play. The band’s music is fun, and sometimes simple-but sometimes not so simple. The band, as we all know, had to end because of the supposed suicide/murder of their frontman, Kurt. The bass player, Krist Noveselic, is now a member of a band called Sweet 75, and their drummer was none other than the Foo Fighters lead guitarist and singer Dave Grohl. The band had to call it quits way too early, for obvious reasons, but their music will continue to inspire the likes of all musicians and music enthusiasts along the way.

This song is in drop D tuning. In drop D tuning the low E string is
tuned down one whole step to D. This enables the guitarist to play power
chords with a single finger. If your favorite band uses drop D tuning
and you want to experiment with this tuning, by all means do so. What
ever you do, don’t learn the guitar in drop D tuning-you’ll get all mixed
up.

In the first two measures, you will find yourself very busy on the guitar.
It is full of thick, rich tones. Though what you will be playing isn’t
too difficult, there are some parts that you may see as difficult. This
song’s catchy riff is very profound, and as for the most part Kurt Cobain
played most of the band’s songs as himself being the only guitarist.
To play the song, start off by placing your 1st finger on fret 9 on the “A” string
and keep your finger there until otherwise notes. Now, strum one time.
Next, you will need to just play the note that your 1st finger is on.
It will be on the “A” string again. After you have done that,
you will need to use your 2nd finger and put it on the “A” string
on the tenth fret. After you have done that strum that once. If you notice,
you are basically doing a “hammer”, but not with as much emphasis
on the “hammer”. Then play and slide the “A” string
from the tenth fret to the twelfth fret and play that twice. ( Still
use your 2nd finger to slide to fret twelve, and lift off of your 1st
finger.) After you have let off of your 1st finger, you will use that
to play the tenth fret on the “A” string, then slide to the
ninth fret. The first measure is done. Practice that a few times to get
the feel for it. The next measure is a little easier. You will do this
by playing the “low E” twice open (remember that this string
is actually tuned down to D, so we’ll call it low D from now on). After
you have done that, place your 1st finger on the “A” string
and play the tenth fret. Then play the open “low D” once. Now,
look at the tablature. Notice that at the end of this measure you are
playing exactly what you played from the end of the first measure, just
one string higher. ( There is an open “A” string note in there
but that is pretty insignificant.) Remember to play that note, you will
need to slide on the “D” string this time instead of the “A” string
from the tenth fret to the twelfth fret and play that note twice. Then,
you will need to play the tenth fret ( and play the open “A” string)
on the “D” string, then slide to the ninth fret on that same
string.

This part is almost identical to the first measure in the beginning,
except you don’t play quite as much, and your focus is on the picking.
The picking order to play this is: With your 1st finger, place it on
fret 9 on the “A” string. Play the “low D” open and
then play the “A” string at fret 9. Then play just like you
did at the beginning and use your 2nd finger to hit the tenth fret on
the “A” string. Play the open “low D” and proceed
to the little riff just like you played on the first measure. The last
measure is pretty easy, but the positioning of your fingers is of great
importance. Start by picking twice the “low D” open string.
Use your 2nd finger and play the tenth fret on the “A” string.
Then play the open “low D” again. Here is where you have to
watch your finger arrangement. The most effective way to make this song
work at the end is by using your 2nd finger on the eleventh fret on the “G” string
and play it twice. Notice the open “D” string (not the low
E string tuned down to D, but the actual open D string which is the 4th
string) and play it accordingly. Now, after you have used your 2nd finger
to play the eleventh fret on the “G” string, simply play it
twice, and then use your 1st finger to play the ninth fret on the same
string. ( Note the open “D” string again.) Finally, use your
2nd finger on the twelfth fret on the “D” string to finish
off the song.

Complete Transcription
To “All Apologies” (PDF)