All Along The Watchtower by Jimi Hendrix

In his brief four-year reign, Jimi Hendrix expanded the electric
guitar more than anyone before or since. Hendrix was a master at merging
all manner of music into one precise art form, often with experiments
that produced high-quality feedback and roaring distortion. His frequent
hurricane blasts of noise and dazzling showmanship proved that he could
and would play behind his back and with his teeth and set his guitar
on fire, and everyone would HAVE to love it. He posessed such considerable
gifts as a songwriter, singer, and master of blues, R&B, and rock
styles.

This is the part of the riff that most people are comfortable with because it deals with barre chords. The lead part is much more difficult. Here is how to play the rhythm part: ( On the rhythm part you will not need to change the arrangements of your fingers at all. You will just simply be moving up and down the fretboard.).

The lead part includes (as always the case with Hendrix) some excellent phrasing:

Take a listen to it all together:

Begin this riff by barring your 1st finger over the seventh fret on
all strings. Place your 2nd finger on the eighth fret on the “G” string.
Place your 3rd and 4th fingers in any order on the “A” string
and the “D” string. That is a barre chord. Play that a few
times and move to the ninth fret on the “low E” string with
all fingers still in the same arrangement. Play that a few times. Then
just move back to where you just were and play that a few times. Last,
go to the fifth fret on the “low E” string and keep all fingers
in the same arrangement. That is the rhythm guitar part. Those progressions
are based on E style barre chords (major and minor). Here’s what the
patterns look like on a chord diagram:

If we tabbed out the chord progression to the rhythm part, it would
look something like this: 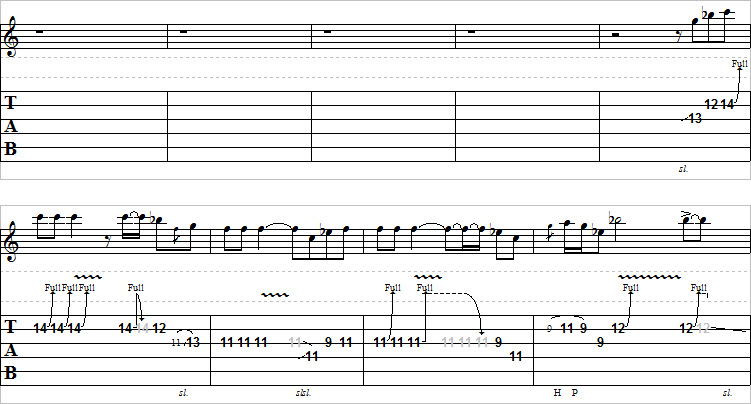