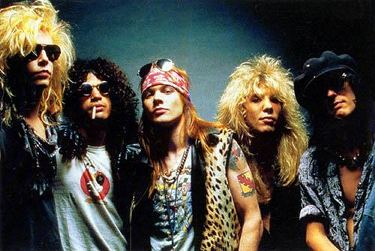 This is the primary riff from “Sweet Child O’ Mine” by Guns N’ Roses. It’s a little tricky to get down at first because there is a lot of string skipping. If you are having trouble with it, you may want to play it along with a metronome with the tempo turned way down. In the recorded version it is played at 120 beats per minute (bpm). The riff itself is written from the D major scale. To play this riff along with the Guns N’ Roses recorded version, you’ll have to tune down 1/2 step (Eb-Ab-Db-Gb-Bb-Eb).

This is a great riff to learn. Trust me, you will benefit from working with this riff if you’re a novice, intermediate, or even an advanced student. It’s a great workout for both the left and right hands (fretting hand and picking hand), not to mention that you will impress your listeners when you can play it at it’s intended speed.

Here’s what the intro sounds like with both the guitar part and the intro bass solo:

It is imperative that you play along with the audio samples or play along with a metronome. Each note is an eighth note which means each note gets half a beat. Since the tune is in 4/4 time (4 beats per measure) you can practice counting eighth notes like this: 1 and 2 and 3 and 4 and.

When you’re trying to play it for the first time you need to pay special attention to the correct fingerings and the picking pattern. Practice it two measure at a time. Since the pattern is repeated twice before it changes, you’re only working one eight note pattern at a time.

You’ll want to create a barre on the 14th fret with your 2nd finger in order to play the last 3 notes. The skin on the side of your 2nd finger will probably get a little sore since you’re probably not used to creating a barre with it. If you’re not quite sure what I mean by creating a barre, take a look at the picture below. We’re simply laying our second finger across the top three strings at the 14th fret:

Play the riff very, very slow at first. You want to be able to play each note evenly along with a metronome at a tempo that is comfortable. If you keep messing up, then you’re trying to play it too fast. At first, you may have a lot of trouble getting through just the first couple of measures, but if you use the correct picking motions and fingerings as I have described (fingerings and picking pattern for the entire riff is below), then you will eventually get it down. It may seem like torture to your hands after awhile, but keep in mind that it’s providing you with a great workout that will develop your timing, picking, finger speed, dexterity, and coordination.

It’s not often that you will hear a bass solo in a popular song, but the mega hit “Sweet Child O’ Mine” has one. It’s a darn good one too, and it’s not terribly hard to learn. Novice players may have to slow the tempo down in order to play along, but with a little practice should be able to get it to full speed in no time. Let’s take a look:

Here’s what it sounds like at it’s regular tempo of 122 bpm. The audio begins in the 9th measure of the song.

Let’s break this solo down into 4 different 2 measure sections. Breaking it down like this will allow you to practice each section one at a time until you get it down. Once you can play all 4 sections, put it all together and play the entire piece. The suggested fingerings can be found at the bottom of the staff.